For more than 20 years, Sonia Nassery Cole has worked the society-gala circuit and the halls of Washington in aid of her native land.

Read the article on WSJ, the magazine from the Wall Street Journal. 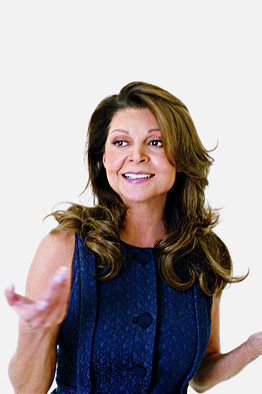 Sonia Nassery Cole is a socialite on a mission. She has raised hundreds of thousands of dollars since 2001 for her country of birth, Afghanistan, whose people have spent much of the past three decades under foreign occupation, civil war or the Taliban.

A New Yorker since she set foot in the city at 17, Cole is by turns tearful and fiery, hands-on yet conveniently hard to pin down. With her brunette mane and head-turning physique, she cuts an indelible figure on the glittering New York–Los Angeles circuit and in the bleakest corners of Operation Enduring Freedom.

Cole says she escaped Soviet-occupied Afghanistan at the age of 14, walking to Pakistan. Her politically connected father called in a favor from a tribal contact, who personally led the teenager to Islamabad, according to Charles Stroud, her friend and adviser. From there, she made her way to the U.S. and landed a United Nations job. “I knew I wanted to save Afghanistan so I said, ‘OK, who’s the president of the United States? Reagan. Well, he can do something,’ ” Cole recalls. “I started writing him, and I never for a moment thought he wouldn’t answer me.”

Reagan invited her to the Oval Office, and their ensuing friendship was her entrée into Washington’s anti-Soviet elite. At 19, she organized a $1,000-a-plate fund-raiser with Reagan as the guest of honor. Since then, she has married and divorced real-estate investor Christopher Cole and has testified on Capitol Hill, forging contacts with politicians, diplomats and filmmakers along the way. Her hero is the Afghani freedom fighter General Ahmad Shah Massoud, the “Lion of Panjshir.” Before his assassination on September 9, 2001, he sent Cole a scroll reading, “Congratulations, my Lioness.”

In 2001, Cole made her first trip back to Afghanistan in more than 20 years. As the plane landed in Kabul, an Afghani sitting nearby explained a field of white flags fluttering low to the ground: “That’s where all the mines are.” Today, Afghanistan is among the most heavily land-mined places on earth, with survivors numbering 60,000 and counting, the International Campaign to Ban Landmines says.

In 2002, Cole turned her free-lance fund-raising into the Afghanistan World Foundation, and it raised $300,000 after expenses in two years. Much of that went to finish construction on a women’s and children’s hospital in Kabul. Now the foundation is raising money for mobile medical care for land-mine victims, with plans to buy two specially outfitted vans, each costing about $100,000, which can send medical images via satellite to physicians in the U.S. On a 2003 trip, Cole met a teacher named Homayra, whose three young sons walked 40 minutes every day to fetch fresh water after a bomb sealed their well. Cole shoveled debris out of the well and watched Homayra at her night job—weaving rugs to supplement her $20-a-month salary. Before they parted, Cole gave her everything in her wallet, about $80. “Every single person in the country has a story like that,” Cole says.

On October 22, Cole hosted a fund-raiser with the French luxury watchmaker Vacheron Constantin, whose $100,000 donation will help fund the satellite-equipped vans. Cole worked the celebrity-studded room in a sequined mini­dress and 4-inch red peep-toe stilettos—a creature of a world far from Afghanistan. “There are so many hardworking people, but nobody sees their work,” she says. “The other side of the coin are the socialites. They just write beautiful checks. They never really want to be bothered with the dirt.”